When I was growing up, the only toilet roll available in my parents’ house was Izal. You have to be of a certain age to remember Izal. But if you know it, then I imagine that reading the word has made you quake with fear. Or shake with laughter.

For those who don’t remember it, Izal was a toilet paper that was rather like tracing paper. I don’t know who invented it, or why. They may have thought it was step up from newspaper, but in reality, it wasn’t. There was nothing good about Izal whatsoever. Even though it was ‘medicated’ (say what?). It did not do the job (literally).

We knew we had gone upmarket when a second toilet roll holder appeared in our loo. This one was for ‘soft’ toilet tissue. What a revelation. It worked! It didn’t chafe! But the question begged, why did we continue to have Izal as well? My guess, now that my parents are no longer with us for me to ask, is that the Izal was there for when the soft loo roll ran out. So why not have two soft rolls? That, my dear, would be extravagant! I have a vague memory of being told at one point that the soft roll was for visitors. But I might be making that bit up.

Running out of toilet roll was a terrifying ordeal, but one that happened with alarming regularity in that house. The toilet was in a little room of its own, and frequently a loud wail would emanate through door. Whoever was about knew what it meant. A dash to the cupboard for spare loo roll to be handed surreptitiously through a crack in the toilet door. And… relax. I am fixated with ensuring that my own children are never faced with this horror, keeping copious amounts of soft loo roll available AT ALL TIMES. 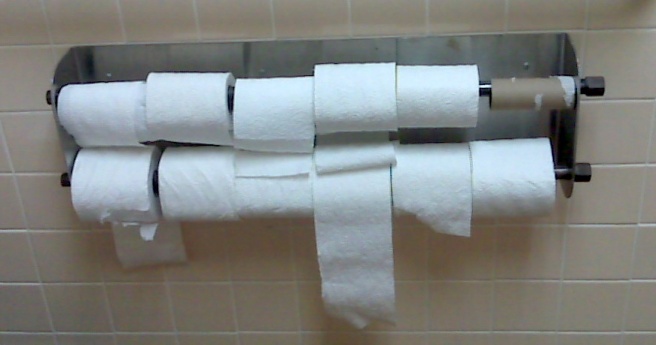 That childhood toilet was a hotbed of action. There were seven of us in the family, with one toilet between us. It was a travesty. When we were small, we seemed to lock ourselves in frequently, with dad having to climb the ladder to explain how to unlock the door. I don’t think he could get in the window as it was too small, but I have a vague memory of squeezing through myself, probably to rescue the youngest. That’s you, Andy.

The loo was also home to Reader’s Digest magazines, and later, lots of those silly books that people give to others at Christmas when they can’t think of a decent gift idea. ‘The worst places in Britain’, ‘Fifty Sheds of Grey’, that sort of thing. Why books in a toilet? I suppose to give us something to do. I have no books in my own (I am dead posh, with two loos and a picture of a saint in one).

The house was sold some years ago, after my mum danced her way off this mortal coil. But that toilet, with its double toilet roll holders, silly books, a window that often had a ladder next to it, and, above all else, Izal, means it will remain in my memory forever. The smallest room in the house, but one with many a tale to tell.